Appeared in Firstpost on 1st June 2018

The Blue Circle organised its latest event on 25 May 2018 at The Leela, Gurgaon, where Gurcharan Das spoke on ‘Making a Life vs. Making a Living’. The talk was moderated by Pavan Choudary and was attended by a distinguished audience of over 70 CEOs and industrialists from India and Sri Lanka.

The Blue Circle is an exclusive community of like-minded industry leaders. A community that learns, entertains and bonds together in an atmosphere of trust and true friendship. The discussion began with Gurcharan Das citing Freud, “One is happy if the people he works with and the people he lives with at home are happy.” And added that earlier a job had only to provide an income whereas today people seek purpose, creativity, contribution and status through a job. 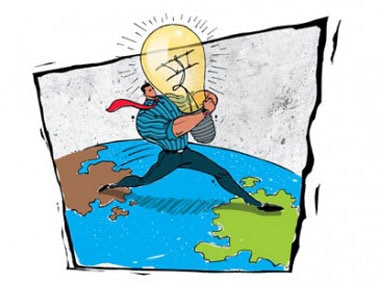 But how can one find such a job? How can one find one’s calling? Pavan said, “The romantic view was that every talented person will somehow experience a pull from his calling almost spontaneously. One’s professional destiny would be just revealed to him. This we know is a myth. Finding one’s calling requires wide exposure, wise assistance and many years of laborious work.”

Gurcharan Das proposed that the greatest works that have been written in fiction and non-fiction should be studied both by the parent, teacher and the student. He strongly recommended reading the 100 greatest books. Pavan underscored the importance of this by saying that different eras have been repositories of different kinds of wisdom. Many of these streams of thought have got lost, muddled or submerged. These 100 books (and if you find that daunting go for the 50 books from the Harvard Classics list) help you rescue these lost nuggets and make your understanding of life more well-rounded.

Founder, Siddharth Anand was proud to share that, “through our Future Leaders Program, two fellowship students from Ashoka University got a chance to attend this event and interact with distinguished guests.” Ashoka University, is the only university in India which adopts the 100 Greatest books program.

Both Das and Choudary happened to be fans of Marcel Proust, the early 20th century French Writer who after years of social climbing reached the ‘high society’ and found that wealthy or famous people were neither the most virtuous nor the most interesting, nor wise. He came to the conclusion that virtues, vices and even intellect are scattered irrespective of wealth or fame throughout the society. We must similarly expect wisdom to be sparsely scattered across society and be looking out for it and ready to receive it from any quarter.

Siddharth said, “aware of these learnings, Blue Circle members are chosen through a careful screening process, through a ‘Credibility Scoring Test’ that we’ve Developed. Our objective is to assist Leaders in collaborating with people of their kind to learn and grow together.” Prospective members could either be invited by the advisory board or referred by an existing member. Siddharth is convinced that the last word on leadership care is yet to be written, but with The Blue Circle he writes the latest. The session ended with questions from the audience which deepened the theme.

The World Of Artificial Intelligence 2018: Analysing AI, Its Use Cases And Impact on Indian Businesses – Firstpost

Road for switch to e-cars not clear, say industry leaders – Times of India

The World Of Artificial Intelligence 2018: Analysing AI, Its Use Cases And Impact on Indian Businesses – Firstpost